Why can’t we be friends? While the band War asked this question in 1974 to great acclaim in the song titled with that question, it’s become relevant this week thanks to an NFL game last week. The attention for two famed spectators at the game is the basis of today’s #CurrentEventFriday.

While at the Cowboys and Packers game, viewers noticed Ellen DeGeneres and Pres. George W. Bush watching the game. Ellen addressed the odd pairing of politically opposed acquaintances on her show earlier in the week. Acknowledging that it might seem strange that a Hollywood Liberal lesbian might seem a strange friend for a Conservative Texan President, she defended friendships that transverse political lines.

Ellen argued that she desires friendships with many people, those that agree with her politically and those that disagree as well. Rising above partisan bickering allows her to remain friendly and civil with many more people than just those who align with her worldview.

Viewers of The Ellen Show and many others reshared the video of Ellen defending the civil friendship with Pres. George W. Bush. Following the example in the clip, several were on different sides of the political aisle proving it is possible to rise above partisanship.

Not everyone was pleased, however. Many on the Left chided Ellen for supporting Pres. George W. Bush. In particular, Mark Ruffalo cited Pres. Bush’s involvement with the War on Terror as reasons to dissociate with Pres. Bush. Joy Behar also pointed out that being friendly to Republicans means being friendly with Pres. Trump, an unimaginable prospect for The View contributor. This seems at least somewhat strange since Behar is at least civil to fellow panelist Meghan McCain, a Republican who has no love lost for Pres. Trump either. Not to be outdone, conservatives also rejected Ellen’s encouragement because of their disagreement with her lifestyle and her previous promise to refuse Pres. Trump from appearing on her show. So at least unintentionally, some on both sides of the political aisle were opposed to two citizens acting civil to one another.

I know that since Pres. Trump ran for and won election, the partisan fault lines have grown larger each day, but I’d like to think there could be some mending. Admittedly, I have many more on my Facebook and Twitter with whom I disagree politically but align with thanks to institutional affinity I attempt to remain above the fray and stay out of arguments with them. Some who share humorous memes about Pres. Trump are legitimately funny and I will laugh or play along with the joke. I agree with challenging hypocrisy on both sides while I may maintain my political preferences.

Can people get along like Ellen DeGeneres and Pres. George W. Bush?

Is there a war on civility? The topic of the latest #CurrentEventFriday.

A week and a month are coming to a close today, and if politicos are to be believed the end of an era too. All fitting for today’s #CurrentEventFriday.  I almost discussed the end of Justice Kennedy’s tenure on the Supreme Court, but that’s going to get enough attention, and I can always wait and discuss his replacement soon enough. I thought instead I’d discuss civil disobedience or what others might call civility in the face of hostility.

In case you missed the news recently, Sarah Huckabee Sanders was denied service by a restaurant in Lexington, VA named The Red Hen. This drew praise from progressive-minded folks who saw the restaurant owner as upholding a standard of enforcing the mores and values of progressivism against an antagonistic and so-called fascist spokesperson. I’m all for free expression by businesses and letting the market determine consequences for such decisions, so the restaurant is free to make the decision to refuse service. Now here’s the rub, the same folks celebrating this denial of service were complaining only a week ago about the legal obligation that Masterpiece Bakery should be required to provide service to a gay couple. Pardon me while I take a Pepcid® to stomach the hypocrisy of the Left.

We also saw Rep. Maxine Waters openly encourage not just denial of service but open resistance to the Trump administration. Shortly after her press conference, we saw Elaine Chao and Mitch McConnell actively harassed at their residence by a crowd of progressives. I also saw on Twitter Wednesday night a video of a conservative reporter consistently asking Maxine Waters about her comments about resistance and its consequences. Rep. Waters just kept sidestepping the questions and growing irritated demanded the reporter come to her office to ask the questions. To my knowledge, that meeting has not happened. (I’m also not going to hold my breath that it ever will).

We’ve also seen civil disobedience in terms of boycotts by Parkland student David Hogg, Et al. towards Publix® supermarkets and advertisers on the Laura Ingraham program. Many of Laura Ingraham’s advertisers chose to end their sponsorship. Publix® also decided to withdrew support of an NRA-endorsed congressional candidate, which Hogg wanted, but they withdrew all corporate giving, including organizations sympathetic to the Parkland cause. Yes, you’re hearing Alanis Morrissette singing along with this news.

I’m bothered by much of the “civil disobedience” by the Left because it’s rife with so much hypocrisy, and it’s a complete 180° from Democrats of the fifties and sixties during the civil rights era. Many Southern Democrats were the targets of the civil disobedience by Martin Luther King, the NAACP, SNCC, and the SLC. I’m perfectly fine if anti-Trump private business owners want to refuse service to those they disagree with. The same goes for anti-Democrat private business owners if they want to refuse to serve their opponents. As a proponent of Capitalism and Libertarianism like Ron Swanson I’d remind them of this maxim, “Capitalism: God’s way of determining who is smart and who is poor.” 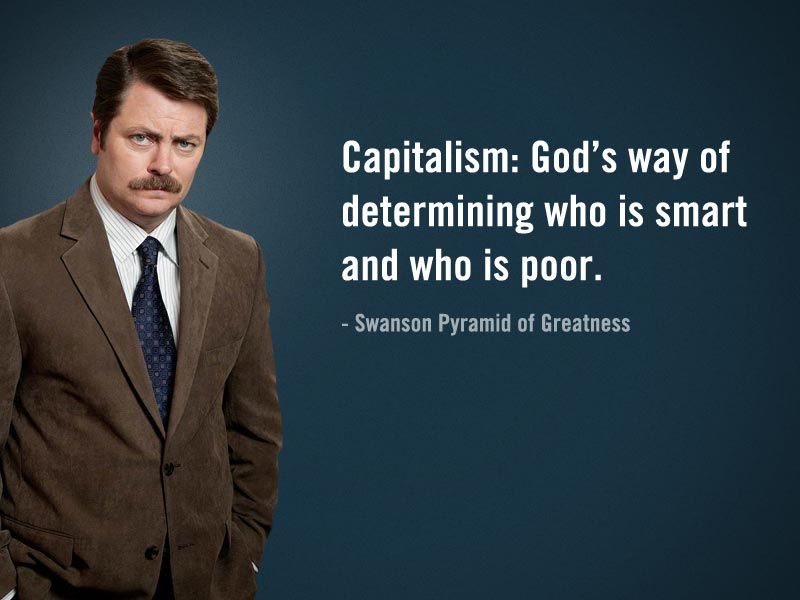 Let me add this caveat, the Masterpiece Bakery did have every right to refuse service and I’d probably have made the same decision. From what I’ve read, the bakery was willing to provide other pastries to the gay couple but not a wedding cake for a same-sex wedding. The bakery is located in suburban Denver, and that means that there were hundreds of other bakeries likely willing to make a cake for the couple and Masterpiece could take the chance of losing business and that’s their prerogative. That’s exactly what happened, another bakery did make the cake and it didn’t really change much for the wedding. The couple chose to push a step further and challenged the baker’s right to refuse service by filing a complaint with the Colorado Civil Rights Commission as a vindictive act against the bakery.  I don’t really think the government has a right to punish a business owner and cause them to violate their conscience. The Supreme Court pretty much affirmed the same sentiment when they concluded the Commission acted unfairly and more heavy-handed than was necessary. I also think the business owners in the Civil Rights era should’ve been challenged on their refusal of service to African-Americans because race is an unchangeable physical trait. It was also worth challenging because the law enforced segregation and there were no other options for service unlike in the Masterpiece case.

I’m also not opposed to debating or not participating with those whom you disagree. I’m all in favor of actual civility amidst disagreement. Unfortunately, we’ve seen too much violence in the last couple years. I know each side blames the other, or media, or whatever. I do think that some of the legacy media gin up the stories of violence and it exacerbates the problem, and some politicians add to the problem by encouraging hostility. If they would encourage discussion, that would keep tempers low, but for the media it won’t get ratings.

What about you? Do you disagree with me? If you do, I won’t let you eat at my restaurant. Just kidding, I’m not that petty.